That's probably the most common headline for startup coverage. That coverage focuses on the wrong numbers.

Startup founders and employees have already chosen to play the VC game. That's their call. Good luck. I worry about bootstrapped founders and aspiring entrepreneurs who may be misled by headlines like the one above to think that money raised or valuation is a measure of success. At best, raising money is the start of the journey, not an endpoint to be celebrated.

If you aren't a founder or investor in a company, the valuation is meaningless to you. Valuation is a bet (guess) about the future, not a measure of anything other than leverage. Still, those in the tech community read the headlines. The numbers get shared and repeated.

Living in the Bay Area, I find that losing perspective is easy. Hearing about billions of dollars in valuations every day can make you forget that a profitable, $1M business is in the top 1% of companies in the US. You know what's (still) cool? A million dollars! 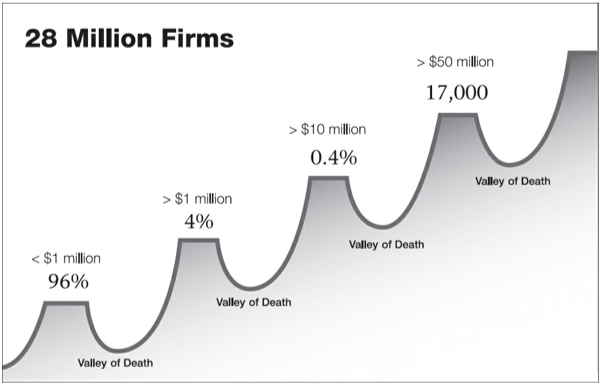 via Scaling Up by Verne Harnish

I Googled the fundraising headline that I turned into a Mad Lib above and found nearly identical articles from big sites like Techcrunch, Forbes, and The Hustle, sites I've never heard of like Tech Hot News, and totally unrealted sites like Coworking Industry.

These articles are easy to write and to copy. They come with built-in clickbait-ready numbers in the headline. If you're a lazy "journalist" or page-view-hungry publication, what's not to love?

If you're an entrepreneur, particularly a new or aspiring one, these numbers can be distracting at best and misleading at worst. Even if you know better, the media coverage of these meaningless metrics can lead you to focus on the wrong things.

Below are three company-level metrics that do not matter for most entrepreneurs and where to focus instead.

Raising a lot of money does not guarantee success. Hell, raising money might not even make success more likely.

Money raised and valuation are unrelated to a company's success. Venture capitalist Fred Wilson says that they're inversely related:

The fact is that the amount of money startups raise in their seed and Series A rounds is inversely correlated with success. Yes, I mean that. Less money raised leads to more success. That is the data I stare at all the time. It makes little sense at face value but it is true based on more than two decades of experience in the startup world.

Let's put my preferences aside for the moment. You can raise money even if you don't have any sales or a business model. This stage is called "pre-money," a hilarious use of what George Carlin called euphamistic language: "A soft language to protect themselves from [the truth]."

Fundraising rounds are designed to last 12-18 months so that you're either profitable by then (unlikely as profitability could impede your future growth and valuations) or, more likely, forced to go back to VCs to raise another round.

Raising money doesn't mean you're a success. You've just been granted a bit more oxygen while VCs continue to judge your worth. You've taken your first hit and are now in the system and on the treadmill.

If you use your fundraising to generate revenue and to get profitable, it is usually at the expense of your growth. While this is a sound move for a bootstrapped business, you'll be punished for it in the VC markets. You'll notice that most tech companies that raise C and D rounds and make it to IPO are still not profitable.

The IPO market is like the NBA Draft if every company was an uber-athletic 18 year old who looks the part but only sort of knows how to play the game. Some become Giannas, but most are Bruno Caboclo, two years away from being two years away.

Top line or gross revenue matters insofar as it shouldn't be zero. Beyond that, it's only the starting point for more useful calculations.

Top line revenue is called such because it's the first line on a P&L (profit and loss statement). What matters, of course, is the bottom-line.

Consider a math problem. The first line of numbers is just the starting point. The bottom line number is the actual answer to the problem.

Top line revenue is the first chapter in the story, not the ending.

Contrary to supply-side economics, companies increase headcount because they need more help or see opportunities for growth, not because the have extra money sitting around.

A cynical perspective is that every hire represents a failing of the business to accomplish something with its exsiting team or software. If you didn't need to hire someone, you wouldn't. Additional headcount is an additional expense. If you can grow the same amount without that expense, you don't add it.

Using headcount as a measure of a business's size or success is wrong. A higher ratio of revenue (or profit) to employees is a good thing. Hiring more people decreases that ratio.

A raw number of people isn't as instructive as profit per person is. Like GDP, per capita numbers are more informative than overall totals.