This graphic from a recent CB Insights newsletter shows the numbers behind three online mattress companies. Can you guess which is which? 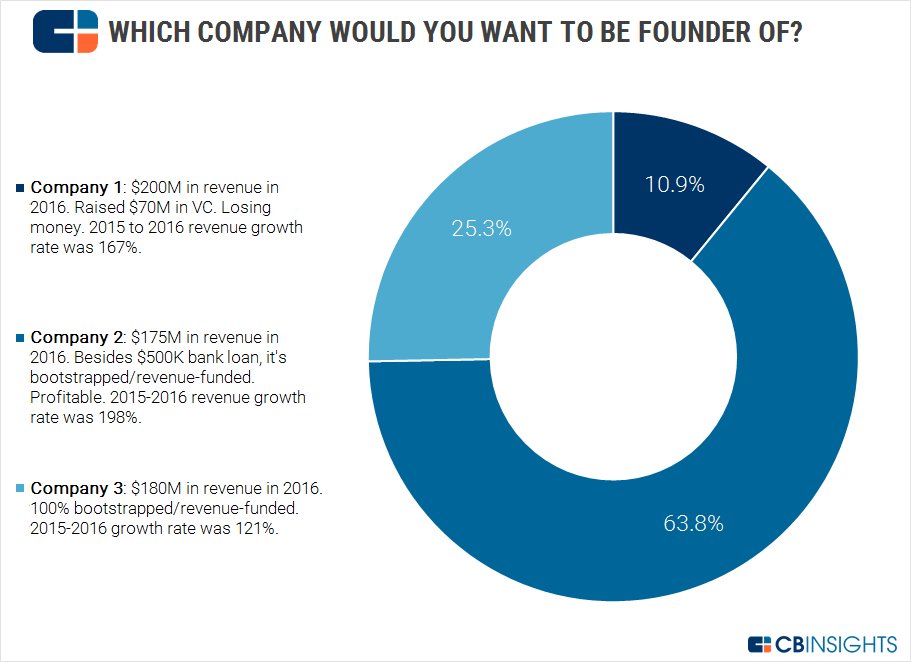 Casper (#1), which seems omnipresent, is losing money and "is a fundamentally inferior company to two of its competitors." Only 11% of CB Insights' readers said they would want to be the founder of the first company on the list (Casper). The other two are Tuft & Needle and Saatva, two less heralded but arguably better performing companies.

I suspect readers would have voted differently if they were choosing companies by their names instead of by their numbers.

As the founder of a bootstrapped vcommerce company, I find data like this to be reassuring.

Seeing a well-funded company like Casper everywhere can seem discouraging. I find myself comparing Tortuga's success to the apparent (or imagined) success of other companies, especially ones that seem comparable or are in the same category.

How often you see a company isn't a measure of it's success. If the only number that the press mentions is "amount of VC money raised," the rest of the numbers probably aren't as impressive.

That money can easily be spent on press and every ad format available (Google, podcasts, newsletters, subways). Ad slots on unroll.me (an inbox-management tool) and podcasts are heavy with v-commerce companies.

From A Tale of Two Mattress Companies:

Saatva claims it was in the black in its third month, which was crucial to its survival. For Casper, that doesn’t seem to be the point right now.

"Every­body has to make the tradeoff between growth and profitability … In Casper’s case it makes sense to invest dollars in building the brand, not just for generating sales in the near term, but over the longer haul to build a category-defining company."

Fun fact: there is no long-haul unless the business is profitable or VCs are willing to subsidize growth indefinitely. In a competitive category like mattresses, Casper will try to spend VC money until their competition goes out of business then will try to actually make money.

Do people consider the economics of physical product companies when saying this stuff? Unlike tech companies that can "turn on monetization," achieve lock-in, or reach a tipping point of network effects, v-commerce companies can't magically turn on revenue or turn off costs. They are already incurring the costs of manufacturing and (presumably) charging money for their product. Their hope is to eliminate competition allowing them to increase prices and decrease marketing costs without killing the growth they need to keep attracting VC money or to IPO.

I'm deliberately writing about another category (mattresses) rather than ours (luggage) to make a point without just seeming bitter or jealous about companies in our category.

Even smaller brands that are far less reliant on outside money, even if they've raised some, can create a perception that is out of line with reality. Performance menswear company Mizzen + Main is also a heavy podcast advertiser. They're probably more well known for endorsements from JJ Watt and other pro athletes.

Yet, on a recent episode of Loose Threads, CEO Kevin Lavelle said that Mizzen + Main has had "on and off profitability for five years." To complement their outside money, they also received their first line of credit in 2016.

While Mizzen + Main is a bigger company than Tortuga by revenue (I assume) and headcount (21 vs 9), we have been profitable for the last 4 years and got our first line of credit in 2016 too.

This is counterproductive. You won't lose because someone else wins. You're playing your own game, even versus competitors in your category.

Remember that more startups die of indigestion than starvation.

Is Smart Luggage Already Over?

The Sound and Fury of Startup Marketing